The 60″ screen served up lyrics and a dodgy karoaoke video. The mic was already in my hand.

“I feeeeeeel good!”, I broke into the midnight air with my James Brown number. Fellow entrepreneurs looked up in shock and amusement. Their wives came up to dance, with wild smiles and snapping fingers.

This was my last night at Sir Richard Branson’s home on Necker Island. I had to end it correctly. 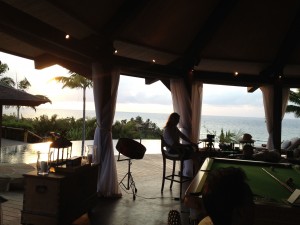 The climax unfolded in the “Temple House”. Where hilltop views of surrounding Caribbean islands pampered our sights. Where Sir Richard Branson held meetings with The Elders, with the likes of Archbishop Desmond Tutu, Former President Richard Nixon, and Nelson Mandela convening to solve global problems. Where I brought James Brown back to life, for one night only.

To think that only 4 years ago, I had emailed Mike and Vishen,

And 4 years after the email, in the exact week I was off to Necker Island to spend 3 days with SRB himself. My dreams tend to have had a habit of realizing themselves, and this was a good reminder.

How did this happen?

I was dining with Vishen at Vineria. Our catch up dinner was long time coming. I had left MindValley, the company he founded, for more than 3 years now. We had a lot to catch up on. 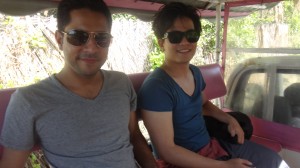 I was told about an exclusive trip to Necker Island, where Sir Richard Branson wanted a group of adventurous entrepreneurs to ideate how his non-profit Virgin Unite can better solve global challenges. Vishen was going. He nominated me. I wasn’t sure if my credentials were enough for me to get me on this trip, especially after the rest of the group had already been selected. 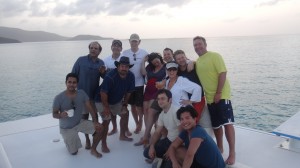 But I was given a yes in 48 hours, and a list of everyone else in the select group. There was an eclectic mix of founders of market-leading companies in airport logistics, finance, direct-response internet marketing, air-purification, and the world’s best in fundraising, accelerated learning, intuitive healing, and more. I was the youngest, and only representative of the tech startup breed. I had a lot to learn from everyone.

3 Days in a different reality field

From the moment I got off my 30+ hour flight and transit, and got onto my yacht, I knew I was in for one helluva ride. 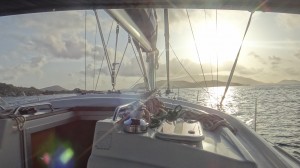 Vishen and I had chartered a yacht to get from Tortola to Necker Island. The yacht’s name was Aquila, which coincidentally is the name of my 24 year old colleague who leads community relationships at SAYS.com. This yacht was also where we would sleep on, as all spaces on Necker Island were full (half the resort burnt down a year ago, and spaces on Richard’s own yacht, the Necker Belle, was full). 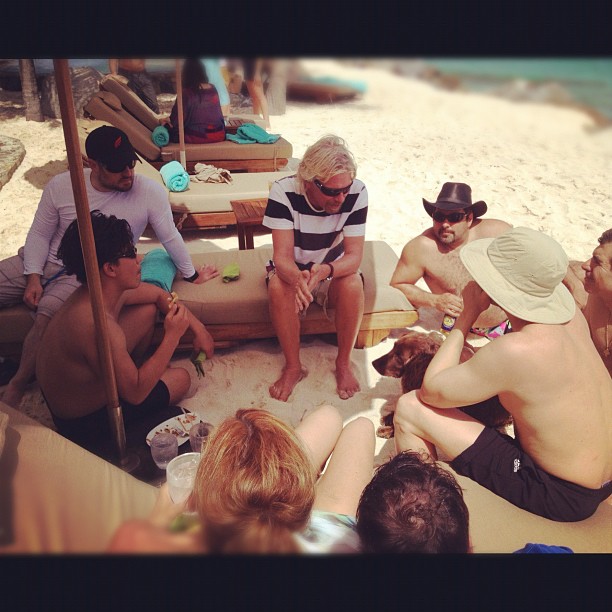 He made himself available to us throughout the day. Walking around the island. Challenging us to tennis. Teaching some of us how to swim. Joining us for every meal. Lounging around, chatting, listening, sharing stories. He was very laid back and took his own sweet time with us…. he was on an island, after all.

The staff on Necker Island attended to our every need. Each of them were consistently caring, super fun, happy, very beautiful people, and really good at what they needed to do. They had great cooks, too. I had different concoctions of fruit smoothies brought to me throughout the day. I ate the best steak I’ve ever tasted in the world. Every meal was top notch. Each of the Necker Island Staff were rockstars in their own way, and together, they made our experience unforgettable.

Sailboat racing against the Google family

On the very first day, we were informed that Larry Page (co-founder of Google) had friends and family over on the neighboring island of Eustacia (which Larry owned). They wanted to challenge us (Necker Island guests) to a sailing race! Despite never having sailed before, I wanted to be in this race. I got a Necker Island team member, Gemma, to give me private lessons at noon. That very afternoon, I was on Hobie Cat sailboat with team mates Robert and James, founders of The Elevation Group, and we were off! It was a close match, with my boat swapping lead position throughout the race. The last 50 metres had our sailboat and the brother of Larry Page’s boat neck-to-neck. It got really wild as all of us stretched across our boats trying to shove and push each other’s boats off-course! In Robert’s heroic last ditch effort, he threw half of his body over the boat, pushing our rival in the wrong direction, just enough to fall out of favor with the wind’s direction – and we hit the shores moments after – and won!

Sunset Drinks on the Necker Belle

It’s a pretty neat boat, as you can imagine. I was on the ‘crow’s feet’ with property mogul, Ash, going 100 ft up the stern. Scary! Did 2 different somersault dives into the ocean from off the boat, one of which had me gloriously land face first. 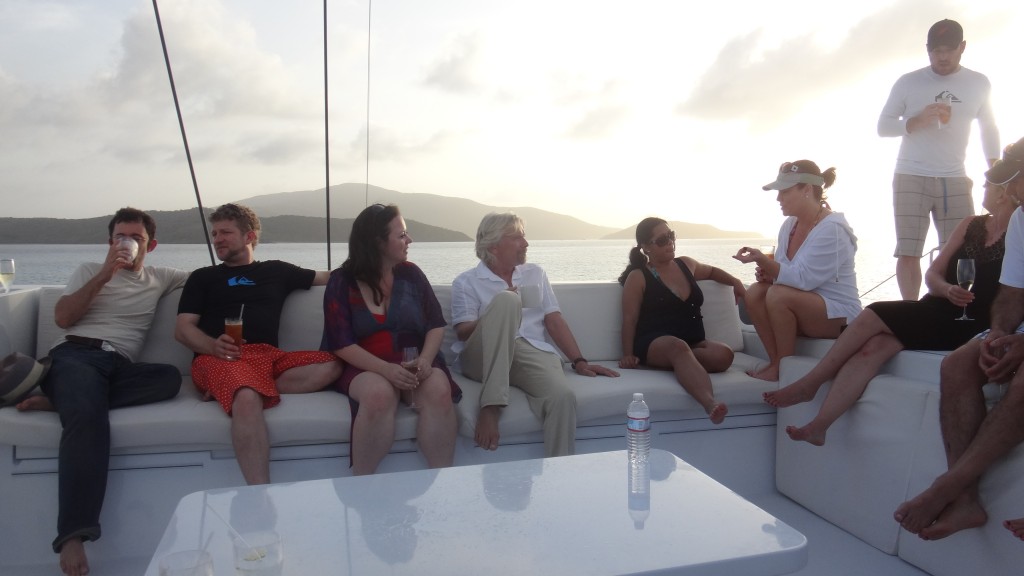 I booked an early morning session with Necker’s resident massage therapist, Candice. We were on a high point in the island, overlooking a cliff. The sounds of birds and waves splashing joined us. She began with a conversation about how I was feeling, and recommended specific oils for me to approve. During the session we chatted about spiritual development, tantra, and I got to learn about her dreams to open a healing center to help women recover from emotional distress. I was inspired by her quest, and offered to make a few helpful introductions. But the big highlight for me, was about how all of the Necker staff were just really stellar people. Richard really hires only the best!

He was really present, and accessible man. Imagine, my first breakfast on the island, noticing a new face, he came over to introduce himself to me. I was in conversation with someone else at the time, and had to look twice as he extended his hand out. 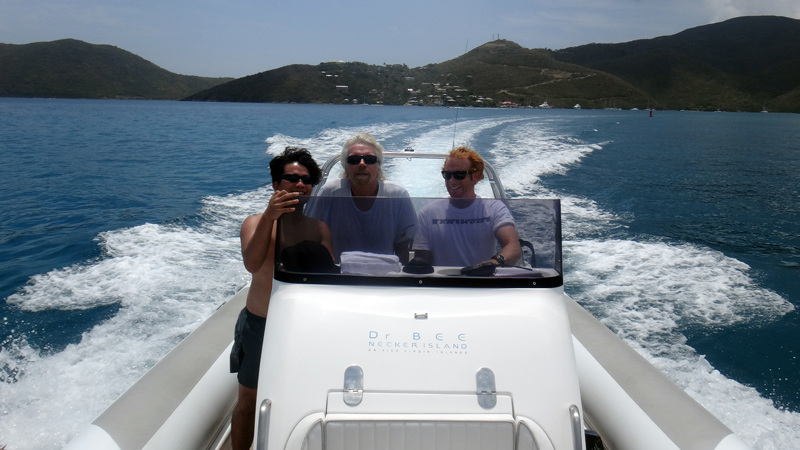 In our first beachside discussion, I probed him on Virgin’s involvement in Silicon Valley type tech innovation. He asked me and Vishen about Malaysia’s progress. On another occasion, I proposed ideas to help him bring his vision of ‘Capitalism 24902’ to life, drawing with coloured pens on paper (I always carry this with me). He looked at my visual interpretation of the idea, still and silent for a while, and told me he loved it! He then invited me to go an a walk with him, as we meandered down to the beachside in the dark, he chatted with me about my journey, my challenges, and gave me encouragement. At the end of the walk, he instructed his top staff to follow up on some of the ideas we discussed, and thanked me for coming to his island.

What I took home

My biggest learning had a lot to do with the relationship between happiness and wealth.

Everyone in the group had different wealth levels. Some gained plenty and lost plenty. Some were on their way up, some were way ahead. However, that didn’t stop each of them from being awesome people. Many of the most happiest ones, I realize were

I believe everyone has a natural tendency to embody and live the above qualities. I distinctly know I do as well, except that I sometimes forget. It’s like a foundational kind of happiness to fully accept yourself, be yourself, share, see the best in any tough situation, and live freely, doing what you love. This is what success looked like on that island, and from this trip, I can imagine how, practice of the above qualities, coupled with good ideas and relentless execution, can be a great wealth magnet as well.

I left my yacht on a speedboat at 5AM to catch my flight. The stars and faraway lights were made brighter by the pitch black seas as I sped away from Necker Island.

As I write this, I am in a Malaysian Airlines flight, 7 hours away from home. I’m excited to see my team. I was informed that they broke an ‘impossible’ sales target while I was away. Things are looking up – and I know there is more ahead. I was given priceless insight and inspiration, which I can’t wait to put into action, to grow my team, and our company as a vehicle to serve the world in bigger, new ways. After all, we all have our own adventure ahead to create.

PS: Special thanks to Joe Polish, Yanik Silver, Kim, Eunice for putting this together!